The 20th Century in America-Lap-Pak Review

Home School in the Woods has provided me with the downloadable 20th Century in America-Lap-Pak suggested for grades 3-8.  Emma (grade 4) and I have spent the last six weeks or so working on this study.  Though not part of this review, we have also used History through the Ages Timeline Figures, Time Travelers: The Early 19th Century and most recently I purchased Composers. I have been very impressed with all of the above. 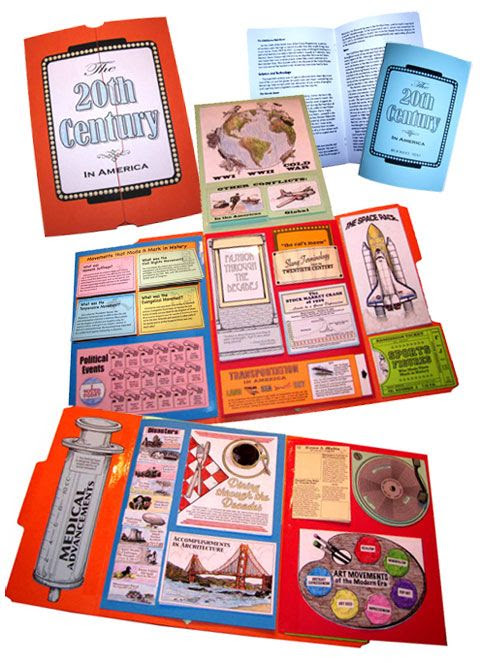 The Lap-Pak consists of 22 projects to be completed and made into a lapbook.  It covers everything from wars/conflicts, food, fashion, sports, presidents, disasters and so much more.  These are the most professionally done lapbooks I have ever used.  Every project is of excellent quality.

20th Century in America-Lap-Pak is available on CD or as a download.  I decided to print out the entire study before we started.  It was a lot of printing, but I like to have everything at my fingertips ready to go at a moment's notice.  To complete this project you will need white printer paper, colored paper and cardstock.  There are some other items you will need as well such as scissors (lots of cutting), an exacto knife, colored pencils, a variety of adhesives and a few other supplies.

Everything is detailed for you in the introduction so you will know what you need including detailed directions for how to put each project together along with diagrams and directions for assembling the lap-pack as well.  Except for one of the projects, I didn't have to reprint anything....even the two sided projects which usually seem so confusing to me.

I decided that rather than do each project in order as they are listed in the booklet we would use the timeline and work through the century chronologically.  Though we are enjoying studying this way, I think it might have been a better idea to just work our way through the book since we started this so late in the school year (chronologically would have worked better if we were spending a year or an entire semester on this.)  However, this is actually one of the things I love about this lap-pack.  You can make it what YOU want it and have it be as in depth or as "light" as you and/or your children want it to be.


A suggested resource list (mostly books) is also included.  We have taken some of the suggested books out of the library and also just took books out that we found on the topics I chose from the timeline.

As I mentioned there are 22 projects to complete.  They cover World Wars and other conflicts, political events, movements that made a mark in history, missionaries, disasters, architecture, music, art, authors and literature  food, fashion and much more.

What we have done is worked on projects as we have read the printed booklet as well as LOTS of books we have taken out of the library from The Wizard of Oz to books about Admiral Peary (I'd never heard of him before), George Washington Carver, The Wright Brothers, The Titanic, The Lusitania....and lots more.

We are not even close to being finished with this study, but I can't wait to see it all put together.  You can view completed samples on the webpage.  I highly recommend this study for anyone who enjoys learning history and doing projects.  I happen to love cutting, pasting, coloring etc so this has been a lot of fun.  We're really enjoying learning and the completed lap-pack will serve as a wonderful reminder of everything that we have learned.  You would probably not like this lap-pack if you don't enjoy projects and/or like lesson plans all laid out for you.

See what others are saying about Homeschool in the Woods  on The Schoolhouse Review Crew blog.

Three different titles are being reviewed; The 20th Century in America-Lap-Pak, The Composer Activity Pak and The Great Empires Activity Pak.

Karen
I am a 47 year old Christian wife and mother. My husband Rob and I have been married for 24 years and have been blessed with 10 children aged 22 to 5 years. We have homeschooled our children from the beginning. Our 13 year old son, Connor has Down syndrome. My blog is an eclectic mix of homeschooling, weight loss and crochet (and anything else that strikes my fancy)