I have really been sick this entire month.  I am now recovering from pneumonia...and woke up this morning with a sore throat, headache and all stuffed up. So now I have something new on top of the pneumonia.  UGH  The doctor told me it would be 4-6 weeks until I felt like myself again.  It is very frustrating to be sick for so long.  I can't exercise and I just don't feel good.  Last winter my husband had the flu followed by pneumonia but he was so much more ill than I am.  He ended up in the hospital.  I have still been able to be up and around so I feel guilty if I just rest (so I haven't) and maybe this is why it is taking so long for me to get better.

So, I am dressed in sweats and planning to just rest today.  I would ask for your prayers as I recuperate.
Posted by Karen at 10:02 AM No comments:

Today is my daughter, Rachel's 17th birthday.  Just over a week ago, my husband and I took her (and our 18 year old daughter) to New York City.  For her birthday and Christmas present she wanted to see The Lion King on Broadway.  It was too expensive to buy tickets for all of us so my husband went to the show with Rachel and Erin and I walked around looking at the shop windows.

I was sick as a dog.  I had a virus (still trying to get over it).  I decided at the last minute that I would go. I had been running a temperature over 101 for a couple of days and had a bad cough.  I saw a doctor on Friday that assured me it wasn't bronchitis or pneumonia and that if I felt up to it I could go. On the morning we went I was feeling a little better so I took some ibuprofen and cough pills and we headed out.  We drove to the train station about an hour and 15 minutes from here.  When we arrived I started feeling really dizzy.  On the train platform I also started feeling nauseated and like I might pass out. I was sweating off the fever from the ibuprofen and I had to take my coat off, squat down and lean against the wall. The train finally came and we got on. I felt sick for the entire 97 minute train ride.  I didn't know what I was going to do.  Fortunately, once we got off the train and I started moving around I started feeling a little better.

We walked directly to Macy's.  Macy's is ENORMOUS!  Once inside, we had quite a time even finding our way back out. The store windows were pretty cool though.

Another view of Macy's

We walked up Broadway and Rob and Rachel got some lunch at a pizza place.  Erin and I figured we'd get something later while they were at the show.  After eating, we all headed over to Rockefeller Center.  We took this picture on the way.Someone offered to snap the picture and didn't run away with the camera which was a plus.

Not long after it was time for Rob and Rachel to head to the show and Erin and I headed out with a map to see a variety of store windows and do some shopping.  I dragged her all over the city (remember I was the sick one!).


Erin and I walked a lot. We went to Bloomingdale's, Bergdorf Goodman's, Williams and Sonoma. We were at FAO Schwarz but we didn't go in...the line was LONG.  I did get us turned around a couple of times adding to the walking. We were hungry, thirsty and tired!  We finally walked back to Grand Central Station so I could find a shop that I was looking for to get Katie some socks.  I thought maybe we'd get something to eat there but we didn't see anything we wanted.  So, we headed back toward Rockefeller Center (heading in the wrong direction...again.....all my fault).  We finally got there.  It was SO crowded.  We got stuck in a crowd and I was very close to having a panic attack.(not that I've ever had one but I felt very panicky) I thought we might get trampled or crushed.  I was SO happy to get out of there.  We were supposed to meet back up with Rob and Rachel at a designated spot in Rockefeller Center but I couldn't get there if I tried.  I called Rob and told him I was outside Radio City music hall.  It took a while but we were finally reunited and walked back to Grand Central.  I was never so happy to get on a train and head home.  (Erin and I were able to get some water and a pretzel at Rockefeller Center.)

When we left the city I was thinking that I could check visiting NYC at Christmas off my bucket list never to go back.  However, I am looking forward to another trip to NYC.  I would just do some things differently.  I really would like to go to Radio City next year.

I haven't posted a menu plan in a while.  I don't know about you, but this is the worst time of the year for meal planning for me. (Summer is a close second though). Half the time, I have no idea what we're eating at 3 or 4 in the afternoon.  It is so annoying to me. I can never get it all together when I'm so busy.  Tonight we didn't even really eat a meal.  I was out in the afternoon and then we decided to take the kids to the mall and to see Christmas lights. I ate an orange for supper. I figured I should plan some meals for the rest of the week so I don't drive myself crazy. :)


Link up your own menu plan at orgjunkie.com.  (Or just find great ideas from other bloggers that share their menus.) This week is found here.
Posted by Karen at 8:38 PM No comments:

Stick with it Saturday

Well I have nothing to report on the fitness front.  I have been sick for 2 weeks and I've done absolutely NOTHING.  I just couldn't. I'm starting to feel better so I hope to start running again sometime in the near future.

I have been having a few good weeks at the scale.  I have lost a total of 92 lbs now!  I'm hoping to really stay on track every day with a few treats tomorrow when I get together with my BFF for Christmas and then again on Christmas Day.  Outside of that, I plan to stick with my program.  I am .2  lbs from the end of the year goal I set for myself a few weeks ago! 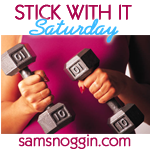 Link up your own diet/exercise post over at Sam's Noggin.
Posted by Karen at 8:57 PM 2 comments:

Email ThisBlogThis!Share to TwitterShare to FacebookShare to Pinterest
Labels: diet, exercise, fitness, Stick with it Saturday

I am so excited about this upcoming adventure that I wanted to share it on my blog.  I recently signed up with a group of ladies to learn 100 Bible Verses in 2013.  The verses are from the book 100 Bible Verses Everyone Should Know by Heart by Robert J. Morgan.  Though I didn't have to purchase the book to participate it looked like it would be good so I purchased it for my Kindle.  I'm glad that I did.

I am really looking forward to this challenge.  I am familiar with a lot of the verses and feel confident that I CAN do this.  I can't wait to get started.
Posted by Karen at 1:23 PM No comments:

I've been taking a bit of a blog break because I've been busy and now I'm sick.  I'm running a 101+ temp and have a nasty cough.  We have plans in New York City tomorrow and I'm supposed to be singing next week in a cantata (where I am the only alto in a small ensemble).  I covet your prayers.  I hope to be back to blogging this week!!
Posted by Karen at 7:11 PM No comments:

Karen
I am a 47 year old Christian wife and mother. My husband Rob and I have been married for 24 years and have been blessed with 10 children aged 22 to 5 years. We have homeschooled our children from the beginning. Our 13 year old son, Connor has Down syndrome. My blog is an eclectic mix of homeschooling, weight loss and crochet (and anything else that strikes my fancy)